It is well known that cars are often involved in accidents, either by crashing into something, running over things, slipping off the roads and similar nasty business. This is also true in astronomy, where accidents do happen from time to time. What is different though, is that while cars can run into things almost everywhere, having something running over your car is a much rarer experience. 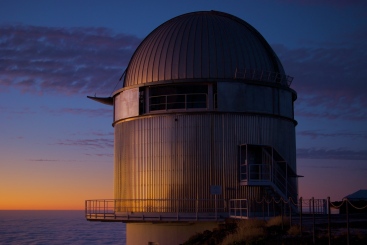 Meet the Nordic Optical Telescope (NOT): A nice, 2.5m telescope of a somewhat peculiar design. Whereas all telescopes have some sort of turning dome, that allows the telescope to point to many different parts of the sky, the NOT is constructed in such a way that not only the dome, but the entire telescope building turns, when you want to aim your telescope at a different patch of sky. This of course involved some engineering challenges, like, plumbing (there’s no bathroom in the telescope), as well as an entry staircase that is attached to the telescope. Which, amongst other things, means that you never really know what direction you are facing when you leave the telescope.

One day, the day-time crew were in need of hoisting equipment into the telescope dome, from the observatory pickup. For the crane to be able to reach the equipment, it needs to be positioned right at the wall of the telescope building. Thus, the pick-up was backed up, really close to the telescope, to make it easier to get the equipment in. This being an everyday operation, the crew unloaded the pickup, closed the dome, and proceeded with whatever they were doing. 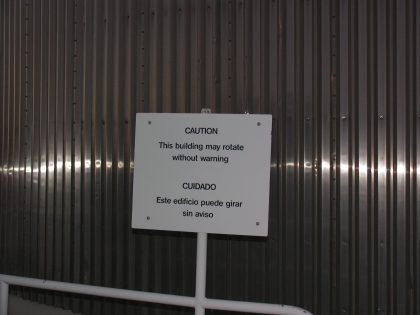 The one warning sign you do want to pay attention to.

Shortly after, someone decided that the telescope should be put in the parking position, so it was ready for the night to come. A sensible thing to do, except that no one had checked if the pickup had been moved away from the building. Thus, as the building turned, the entry staircase rammed into the side of the pickup, with the telescope effectively running over the car. Fortunately, the impact cut the wires to the safety system, which happened to run along the staircase, forcing the telescope to an emergency stop. Had this not happened, the telescope building could have been severely damaged, and the pickup as well.

The damages were luckily so small that the pickup could drive out of there, and at the time of writing, is still being used at the telescope. This is also one of the times where it really pays off to pay attention to the warning sign outside the telescope building.