Most astronomical instruments do not come in anything that resembles standard shapes and sizes of normal cargo. It’s not like you go down to the local post office and ask for “one of those boxes for shipping satellites you have out back”. Getting the instruments from A to B usually requires a little more effort, as it is sensitive equipment, often in odd shapes. But sometimes you are in the lucky situation where a more ordinary container can be used with success. 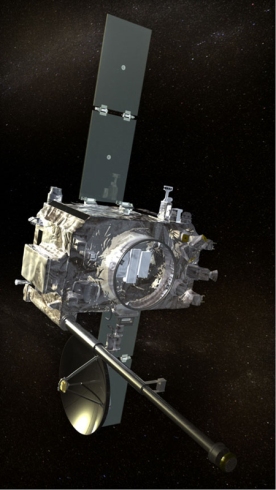 Artists’ illustration of one of the STEREO satellites. Photo credit: NASA STEREO

In October 2006, NASA launched the STEREO mission, which consists of two, nearly identical satellites, with the purpose of making stereoscopic observations of the Sun to study, for instance, coronal mass ejections and other Solar phenomena. But first the satellite and the instruments on board had to be assembled, which involved shipping some instrument parts in… non-standard containers.

The IMPACT instrument, which is used to study the energetic particles from the Sun, is mounted on a large extendable boom that would be deployed after the satellite had launched. But first the boom and the instrument had to get to the facility where the satellite would be assembled.

On one of many travels from a STEREO meeting, the IMPACT project manager, Dave Curtis, and IMPACT engineer Jeremy McCauley were discussing the status of the instrument. They had come up with a stable and functional design for the boom, but schedule was getting tight. The boom had to be sent to Los Angeles for testing, only a few weeks in the future.

Jeremy had been running the preliminary design numbers and figured that they needed a roughly man-sized box to transport the boom. To this, Dave quipped, “Wouldn’t it be great if we could just use a coffin?” They had a good laugh about that, and went back to work. 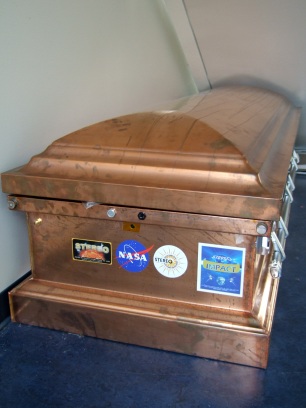 The STEREO boom transport case. Thanks to Eric Bellm for providing the photo.

A few days later, Jeremy returned to Dave’s office, asking if he had been serious about using a coffin. He had researched both options, and learned some interesting facts about caskets along the way.

Caskets can be made from metal, which was a requirement for STEREO, and one could be bought for $6000 and delivered within two days. For comparison, a custom built metal case would’ve cost more than $12,000 and taken 6 weeks to get delivered. Being on a tight schedule, the choice was obvious. A casket was ordered, and the boom shipped to LA in this rather unconventional container.

One additional thing had made using a casket especially attractive – it turned out that every wide-body airplane has a special space for a casket to be transported in the nose of the plane.  So, not only was it cheaper and faster, but shipping was significantly easier since it was a container in a standard form that people were used to dealing with.

This shipment no doubt raised more than a few eyebrows, and one can only imagine what went through the heads of the people dealing with it. Was some old, worn-out instrument getting retired and transported to its final resting place? Do NASA really send dead aliens in caskets? Or had some high-ranking official within the organization passed away? Sadly it was not nearly that interesting, it was merely some astronomers being dead serious about getting their instruments delivered on time.

It’s also a good example that not everything in astronomy needs to be custom-made. Sometimes less will do just fine, even if less means something unconventional.

Thanks to Jeremy McCauley for providing this anecdote.